Fear not, I am not going to perform any analysis proving the intellectual superiority of any race or gender. Also, as a 100% Spaniard (I need to check on that though) I do not belong to the “elite” of ethnics groups disputing supremacy, namely: Northern Europeans, Jews and Far-East Asians and, quite frankly, I feel kinda good about it since I’d rather stick to the Latin Lover stereotype which, by all means, it is true.

Recently I came across a video titled Steven Pinker – Jews, Genes and Intelligence. Typically I would have disregarded this video as your standard white supremacy internet rhetoric however, I know Steven Pinker from his published works and achievements, and he is no small fish in the Psychology and Cognitive Science world. That is why I decided to give a shot to his video to see what’s what until he began talking about statistics. These are his words:

“…Jewish achievements might have an explanation on another fact that has long been known; that Jewish score on average higher on IQ tests than any ethnic group for what there’s comparable data. Their mean IQ is between 108 and 115, the mean of the European population is by definition a hundred which means that the Jewish average is a whole standard deviation higher than the [European] average… Importantly, even if the effect is moderate on average it’s a mathematical fact in Normal Distributions, that is Bell’s Curves, that small effects in the average can translate into huge effects at the extreme… So with one standard deviation difference between groups a score that is three standard deviation above the mean in the higher distribution is four standard deviations in the lower distribution which means there are 42 times as many people at that cut off.” – Steven Pinker

In short, according to Steven Pinker there are 42 times more chances for a Jewish baby to be born an IQ genius than for an European one… But, is that really so? 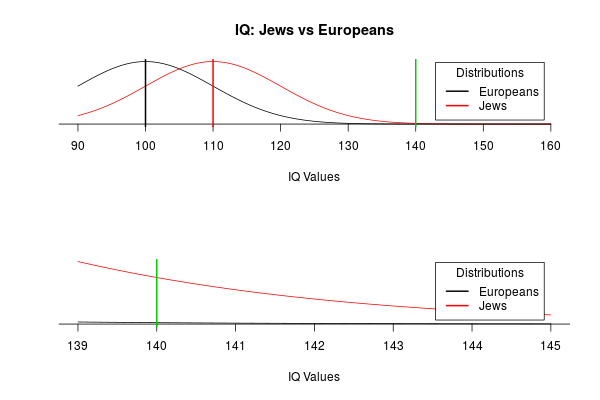 Since Mr. Pinker is making polemic scientific claims based on the behavior of statistical distributions, it’s perhaps necessary to explain a little bit more how distributions work and, for that, I will explain a story about the day when I analyzed data showing very clearly that females in the Faculty of Mathematics and Statistics in Barcelona had, on average, considerably higher grades than males.

So once upon a time, when I was studying my degree in Statistics in Barcelona, I took a course on Data Mining with Structural Equations among its syllabus; the professor at the time didn’t know much about SEQ and he decided it would be a good idea to learn about them by teaching them, nifty trick if you ask me.

In order to finish the course we had to analyze data from a survey among students of the Faculty of Mathematics and Statistics in Barcelona which we carried out diligently. One of the questions in the survey was gender, and another one was current average grade in your studies, and so I decided to perform a little side analysis on my own with this data and see if there was any statistically significant difference in grades between genders… Ready for the results? Here we go…

First thought coming to my mind: “we truly are sexist pigs”. How can we otherwise explain that the Fields Medal had not one single female winner (at the time) among its nearly one hundred awards!? There seemed to be just one conclusion; women were better at mathematics than men and men were holding them down… but then…

A Tail of Two Distributions

When I was going to leave it at that, and while still in shock, I realized a little something; the variance among men’s grades was about twice as big as that among women. What could this mean? Let’s plot both distributions one on top of each other to better understand the implications:

As we can see, even though the mean for men is considerably lower its bigger variance allows it to catch up with women’s distribution at around a score of 94, and beyond that men’s proportion only grows bigger and bigger the further we go in the scoring.

Now, if we consider that those individuals awarded with the Fields Medal must be in the far end of that tail this might explain why so many more men excel at the highest levels of mathematics compared to women… But does it? Maybe not.

One important lesson to be learned is that if we want to talk about what groups produce more geniuses we should not care at all about the average IQ but about how the tails of the IQ distributions behave, and for that kind of analysis all the studies that I have seen so far are inappropriate, including Mr. Pinker’s and the one we have just discussed before for men and women.

As it turns out, focusing on the bulk of the data population to understand the tails behavior can be very misleading, that is why there is a whole branch of statistics to study extreme cases.

For example, we might gather data about the height of waves during storms in order to build an oil platform capable to sustain giant waves. We conclude that the probability to experience a wave higher than H is ten to the minus miracle based on the tails of our Bell’s curve. We then build an oil platform capable to sustain waves as high as H and… then the platform is destroyed by a 2H wave soon after. What happened? Let me tell you: it was not a miracle.

When it comes to tails only tail data matters and the data outside the tails is mainly dead data with no use other than distract us from the true extreme behavior of the distribution at hand.

But anyway, what are high IQs good for? World renown geniuses and Nobel Prizes like Richard Feynman had a IQ of just 125 and Albert Einstein graduated the last of his promotion, on the other hand the person with the highest IQ recorded in history (228), Marilyn vos Savant, is very famous for… being smart, that’s it, her greatest intellectual achievement has been to write a Sunday column in Parade Magazine, nothing even remotely close to the amazing achievements Madam Curie had despite the fact she graduated second in her Mathematics degree… also, anyone knows who graduated first? And if we check on the World Chess Champions and its 50% Jewish winners mentioned by Steven Pinker, well… my smartphone can beat 100% of them.

So you see, seems to me that perhaps we are too preoccupied with the IQ thing and we have too little concern about enhancing and promoting non IQ skills like kindness and imagination which, though they are harder to measure, they are easier to feel and they are of so much importance for all of us.

So where’s the Dragon with the biggest tail?
Let me tail you that I do not know,
but I do now that tails without Dragons
cannot do much on their own…
and something tails me that tails know.

One thought on “IQ Tails of Race & Gender”